Here you will find all the information about the transport rules and prices to prepare your trip. 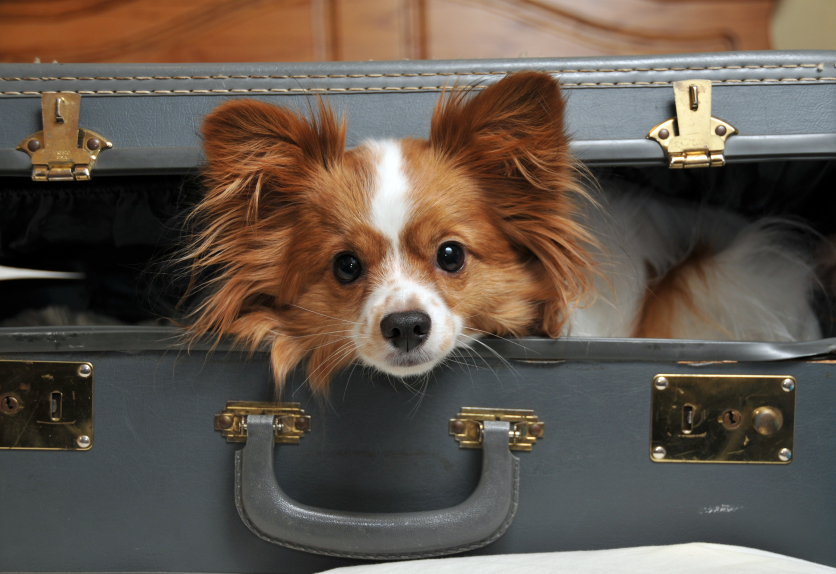 When you want to travel with your pet, we can assure you that we will take the best care of them.
Pets (dogs, cats, birds) are allowed in the cabin if the following requirements are met:
1. The passenger must indicate when they book the trip that they wish to travel with their pet.
2. The animal must not weigh more than 5 kg including their container (except for guide dogs for the blind and partially sighted and for hearing dogs).
3. The animal must be placed in a solid container (crate, cage or basket) with air holes and its total dimensions must not exceed 115 cm (55 x 40 x 20 cm).
4. Animals must be transported with valid documentation, such as health and vaccination certificates and entry or transit permits.
5. A medical certificate confirming the passenger's disability is required for transporting service dogs accompanying passengers who are partially sighted or hard of hearing.

To be allowed in the hold, the animal must be placed in a fully secure container (robust, with a watertight floor, lockable, with air holes) which is suitable for the size of the animal.
The container must have a luggage tag with the name and address of the owner.
Damaged containers will not be accepted at check-in (lock needs to be in good working order).
There should not be any hay or straw into the container.
The passenger must indicate when they book the trip that the animal will be travelling.
If accepted, the animal travelling in its crate with its food will not be included in the passenger's baggage allowance. The passenger will need to pay the applicable fee.
Service dogs accompanying passengers who are partially sighted, hard of hearing or who have a physical disability, and their crates and food, will be carried free of charge as extras in addition to the normal baggage allowance, in accordance with the Carrier's Regulations.
Accepting animals for transport is subject to the passenger assuming full responsibility for them.

We inform you that pets in cabins and pets in the hold are not accepted on Royal Air Maroc flights to UK, and on flights which are chartered and operated by the Qatar Airways. *Following the requirements of the Spanish authorities, the transport of pets is strictly forbidden on flights to and from Bilbao.

Passengers must pay an additional surcharge for pets transported in the cabin, with the exception of certain cases mentioned in the table below:

Max weight 5kg including carrier. Permission to carry more than one animal per carrier provided. Total weight is not over the limit of 5 kg.

Animals in the Hold

The weight of an animal in the cabin must be less than 75Kg. Above that weight, the animal must be transported by freight.

Free travel on the entire RAM network in addition to the baggage allowance.

If you have a connecting flight

We inform you about the new requirement of the French authorities from the Ministry of Agriculture and Food, about the travel conditions of pets from developing countries to European Union countries on RAM flights.

These animals traveling by air may pose a risk of introducing rabies virus into the EU territory, especially at summer period when the flow of travelers increases significantly. Several hundred of non-compliant imports are recorded each year in France related to the illegal introduction of pets that comes mainly from Maghreb (Morocco, Tunisia, Algeria) and Eastern Europe, countries where rabies remains endemic. This situation requires the placement of these animals under prefectural order of surveillance, or even for risky cases, euthanasia when the animal arrives to France.

In order to prevent the risk of transmission of the virus, the European regulation subjects the importation of a pet to a set of sanitary conditions which are harmonized by EU regulation (No 576/2013 and 577/2013)

Besides, animals accompanying travelers from developing countries to European Union countries must:

List of the 27 Member States of the European Union: